I'm on the Design Team! 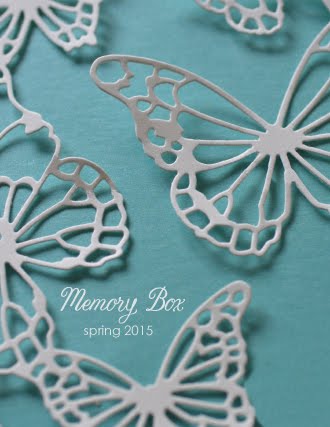 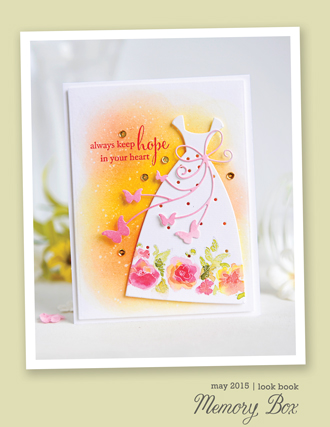 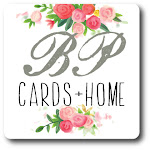 Outside the Box Design Team Blog

Is anyone else tired of the snow yet? 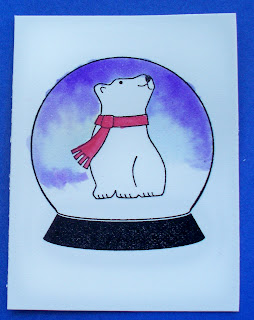 This is Fred P. Bear sitting inside a snow globe watching for snow.  I feel like I'm watching it snow every day lately!  We had snow this morning for a few hours.  It didn't add up to much, but all the snow we've had thus far makes January feel like the longest month.  I just checked the forecast for this week and it looks like chances of snow Sunday and Tuesday with a mostly sunny Monday in between, snow 70% likely for Wednesday and more chances of snow for Thursday and Saturday with a mostly sunny Friday in between.  We'll see how much that forecast changes as the week goes on.  At least February shows up, but will the groundhog?

This is a busy week for me with radiation every day.  I also see Meg for cranial-sacral work on Monday afternoon and I have an early early morning appointment for acupuncture on Wednesday.  I'll hit the midpoint of radiation treatment this week, with my last treatment now scheduled for Monday, February 28th.  Think I'll be celebrating on March 1st!

I had another Herceptin injection on Friday--the oncology center has changed the size of the needles it uses with ports to a larger size, so I'm kind of black and blue and sore today.  Red and white blood cell counts are rebounding nicely, but I'm staying on my potassium pills for another three weeks as that count is still really low.  The reward for the trip to Portland was a stop at the LLBean factory store where women's pants were on sale for 50% off the lowest price, I had a $10 coupon, and my pants were free!

These are the books I read in January:
THE SCENT OF RAIN AND LIGHTNING--Nancy Pickard
BLACK & WHITE--Dani Shapiro
FAMILY HISTORY--Dani Shapiro
PRAYERS FOR SALE--Sandra Dallas
VALERIA'S LAST STAND--Marc Fitten
CROOKED LETTER, CROOKED LETTER--Tom Franklin
THE WHISTLING SEASON--Ivan Doig
and I expect I will finish this one this weekend...THE LAST DAYS OF DOGTOWN--Anita Diamant

As much as I've been reading every month, there is quite a stack waiting to be read.  I still haunt bookstores from time to time with my wish list and Kellie, Connie, and Donna keep me in books as well.  There's never a lack of something to read!

The two books on the top of my list for February are:
AS I REMEMBER--M. Eugene Thompson (my dad's book about his life thus far which I received for Christmas and have begun reading)
THE HIRED MAN--Cedric Berry (an as yet unpublished first novel by a family friend; my dad read it this week as the first reader; I'll be the second)

The February image below is by April Meeker, a blogger @ secondsister, artist, seamstress, embroiderer, jeweler, and craftsperson extraordinaire.  I love her work! 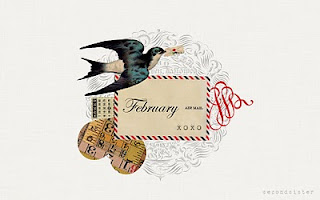 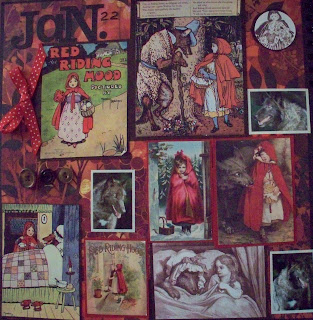 I have been collecting vintage Red Riding Hood books and prints for quite a long time.  I have always had a strong connection to this fairy tale.  Just about a year ago, on January 22, 2010, I created this collaged page in one of my art journals. I have several contemporary versions in my collection as well; favorites include one with black and white photographs that is really quite disturbing, and one that is quite humorous because it stars William Wegman's weimaraners.   I have several versions from other countries and one framed print that hangs next to my table that I love.  I really love the vintage images from the old books the best.  I missed an auction recently (because of one of those snowstorms) where two vintage books were up for bid, and I am always checking the antique malls and used bookstores for versions I don't have in my collection.  Some of these books can be quite expensive, so I'm always looking for a good deal.
Posted by Anne at 3:58 PM 2 comments: 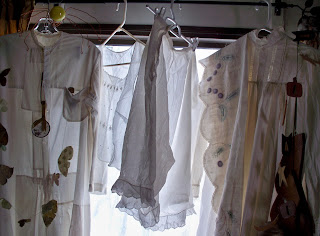 I decided that this year I would take photographs of some of my collections in The Woodshed and post them to my blog.  I have quite a nice collection of vintage white garments.  I display some of them as window curtains.  This is a photograph of the window near my desk--two white cotton nightgowns, a chemise, bloomers, and an embroidered bureau scarf.  In the window over my desk in the studio I have children's clothing and the other window in that room is festooned with a collection of vintage white aprons.  I have a large basket of old white goods next to my sewing table, and I've been thinking of ways to upcycle them, to reuse them in items of contemporary clothing.  This collection began when I was scouting for costume pieces for community and high school theatre groups.  Many of these items have been on stage at one time or another.  For example, the bloomers, chemise, and one of the nightgowns were all worn by "Eliza Doolittle" in a production of MY FAIR LADY.   The nightgown on the left in the photo has really interesting patches.  I have my eye on another one at an antique mall in Hallowell, again with lots and lots of patches but it also needs more repair as it is in pretty bad shape.  People don't expect to see items of vintage clothing used as curtains but it makes perfect sense to me as a way to show them off and reuse them.
Posted by Anne at 7:56 AM 2 comments:

I took my camera with me yesterday and today when I went for my radiation treatment.  Here are some of the pictures I took. 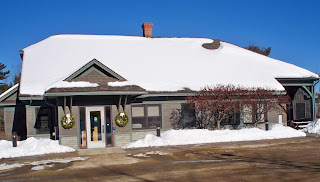 This is the building, The Coastal Cancer Treatment Center.  To the left there is a lovely pond and a meditation garden beside a stone wall.  Also to the left and down the hill there is a picnic table.  It is lovely here in the summer and fall, but everything right now is buried in snow and the pond is iced over.  Someone keeps a path shoveled around the building so the bird feeders can be filled.  You can watch the birds from the two waiting rooms and the exam rooms.  I've seen chickadees mostly and a male cardinal. 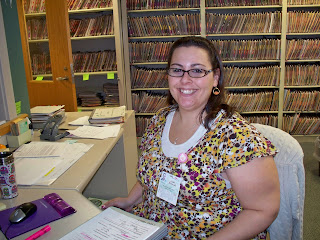 Leslie is the official greeter.  She keeps everything running smoothly in the front office.  She has the most incredible smile! 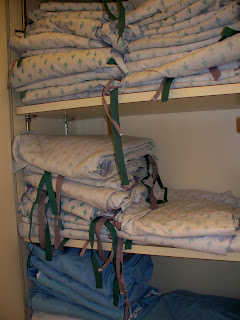 I get a new wardrobe in the locker room every day--I get to choose the gown I want (open and untied in the back, please)--I prefer the ones with the darker green print-- and a lovely blue robe.  Sometimes there are blue and white striped robes which I like the best as they are longer and actually can tie closed in the front.  I at least get to wear these to and from the radiation treatment room. 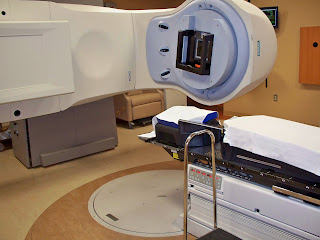 This is the linear accelerator machine and the table I lie on.  The room is kept fairly cool because of the equipment. 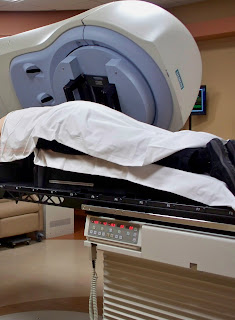 This is me covered with a warm sheet waiting for the procedure to begin.  The table has been adjusted to quite high off the floor.  The machine is automatically adjusted and lowers to give me radiation first on my right side.  Then it moves up over me and down on my left and I get a dose from that orientation, too. 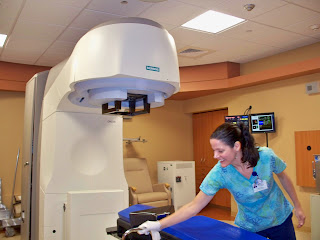 When I am finished, and it only takes a very few minutes, the linens get put into a hamper, and one of the radiation technicians (there are usually two or three) scrubs everything down and then the table gets reconfigured and adjusted for whoever is next.

Then I go back to the locker room, discard my gown and robe into the hamper, treat my skin with some fresh aloe, and get dressed. Then it's, "Bye, Leslie!" and I'm on my way again. I'd say I'm there for thirty minutes or less most days, from the time I greet
Leslie until the time I bid her farewell.

And you've gotta love the poster in our waiting room there... 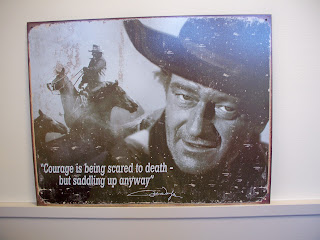 My First Week of Radiation

I am having external radiation treatments Monday through Friday at the Coastal Cancer Treatment Center in Bath.  This machine is a linear accelerator. 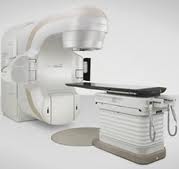 The table gets adjusted to fit me as I lie face down with my head closest to the machine.  There are pillows and cloths and an open space in the table between my waist and my neck. I'm moved around until the tattoos (tiny dots on my back and right side) line up with the red laser beams and the table is raised to the correct height.  Then they cover me with a warmed sheet.  Mmmmm.  The machine itself moves down and around me and the radiation comes from the black square that you can see on the top of the machine as it tilts and comes down around my left side.  The entire procedure, from getting on the table to getting off, takes only a very few minutes.  The three women who are in charge of the whole show are Jess, Dawn, and Heather.  They are the best!!!  I also see the nurse Cyndi and one of the doctors, usually Dr. Pryzant or Dr. Godin, every Monday.  I will have thirty-three treatments.  Four down and twenty-nine to go!!! 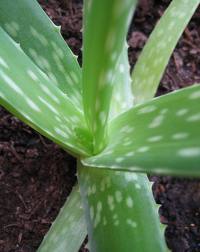 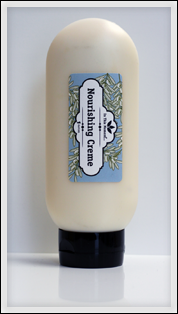 This is an aloe plant.  I bought two of them, both larger than this one.  I have to treat my skin and keep it moisturized several times a day after a treatment.  My two aloe plants have been blessed and dedicated to this purpose.


I also use a nourishing cream from Elumus.  All of this is to prevent my skin from breaking down, become reddened or tanned.  I guess it's sort of like treating a sunburn before it starts or it gets too bad.


Today was the first day in a long time that I taught a class at Your Maine Stamper.  Seven people came to make valentines--cards and little gift pouches.  Below are my samples: 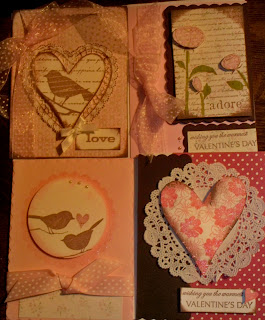 Sorry the image isn't clearer--problems tonight with my camera, memory cards, and battery power.  The cards they came up with were really lovely.  Many of them used different colored inks or rearranged their card fronts or used different papers for backgrounds.  Many of the layers are pop-dotted up to be more three-dimensional. 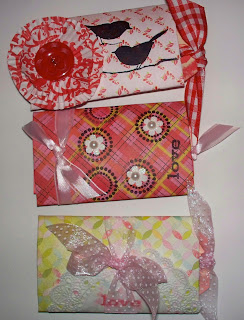 These are the little valentine gift pouches made from recycled toilet paper tubes!  Again, the people in class used these as models and went off on their own using a variety of papers, stamps and inks, ribbons, and embellishments to create their own.  They decorated manila tags to tuck inside each one, too.  Fun!!!
Everybody tells me that radiation makes you tired, not sleepy tired but not wanting to do anything tired.  Right now I feel great and have had lots of energy this week and I think I've accomplished a lot.  We'll see how I do as the treatments progress.  I have another class planned for next Friday and then nothing else scheduled until March just in case I'm overwhelmed by the tireds.  There are no other side effects with this treatment, so it feels like a piece of cake compared to chemo.
Posted by Anne at 4:22 PM 2 comments: 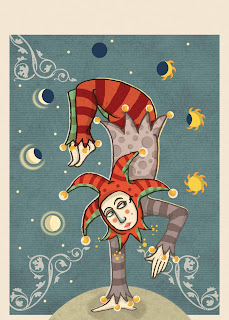 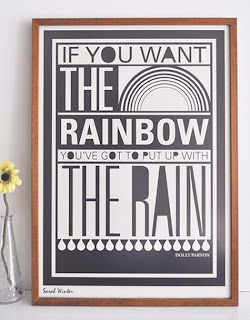 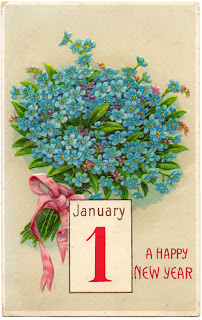